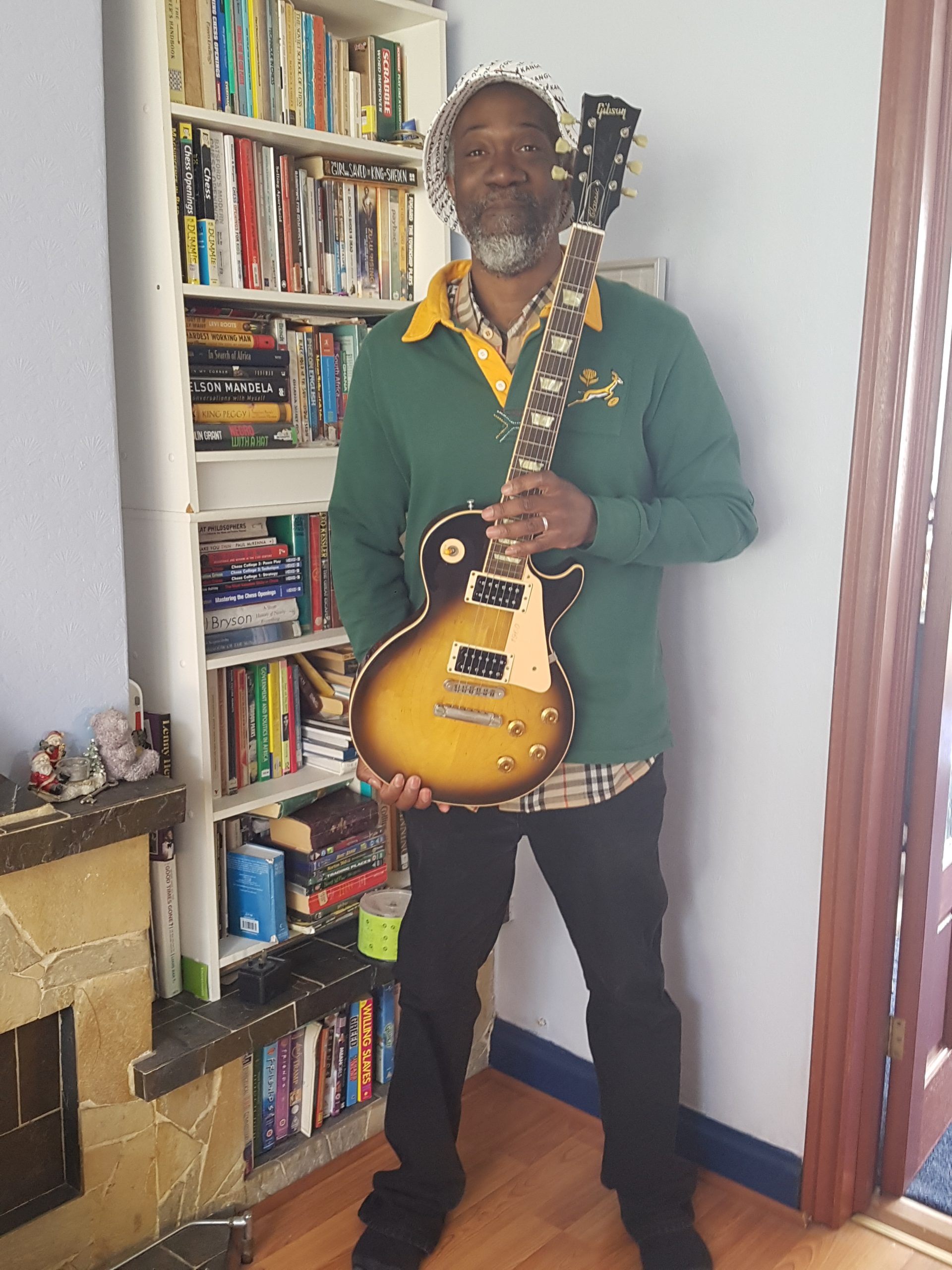 Today we talk about Manz Dem, a book by Derrick Wallace, published with our publishing house Europe Books.

Europe Books had the pleasure of interviewing the author Derrick Wallace, to get to know him better, how he chose the title of his book Manz Dem, as well as what it was like to work on this musical project with other 15 important guitarists.

I decided to write my book in late 2020. Actually, the book was ‘always there’, notwithstanding the global pandemic of 2020 provided the momentum to get started.  To be more precise this project lay dormant bubbling away in the background as far back as 2007! Sometimes life takes you on different pathways which may turn out to become a wonderful adventure. You know the saying nothing before the time! I believe the time for my book has arrived. Subjectively speaking, as a creative I’m a fan of exercising constraint. You’re dying to bring your work or narrative to an audience. However, because of said subject matter the market may not be ready. In short you have released the product too soon, ahead of time, and unfortunately, what may have become an international best-seller, at best shifts a few units instead of the millions it was destined for. One of the positives of the unexpected global pandemic; is a noticeable increase in books sales.  I for one am extremely happy that my book has a greater chance of becoming an international success because of the present reading climate!

Wow!! I was star struck. Here are 15 of the most important African/Caribbean/Duel Heritage guitarists in a generation, and I have full access to their life. It was truly a breath-taking experience which I will never forget. I mean one minute I’m watching them perform brilliantly on national television with some of the world’s leading artistes; at the most prestigious award ceremonies and concert venues; and in the next breath we are speaking like long lost pals even though I have just met them. Truly wonderful!  The guitarists in the project outshone themselves. They rose to the occasion. I asked for music from their catalogue but some point blank refused, and set about creating new previously unreleased works (See QR codes underneath artistes’ picture) specifically for inclusion in this project.  They are some of the humblest people I have ever met. It has been a real pleasure working with them. Yes, they are very famous but extremely likeable. I felt very inspired working with these wonderful musicians.

I wanted a title that would stand out on the shelf, equally important a title that would be a unifier for the artistes portrayed in the book. But there is a greater reason perhaps for consideration. In the UK Black Culture is arguably the most powerful and influential of all the cultures in British society, especially amongst our youth. I find this astounding and incredible. People with no cultural affiliation or connection with the African or Caribbean landscape are drawn to their way of communication, dress code, fashion statements, foods, and entertainment, music; the whole nine yards.  With this in mind I wanted to name the book with a subtle cultural persuasion. Rather than calling the book The Men. Manz Dem (to me) sounds more appealing and powerful. The accurate terminology for all of this is colloquialism. These colloquialisms have become part and parcel of British Society. Certain words have now found a place in the Oxford English Dictionary! Hence me calling the book Manz Dem; based on these considerations.

The message I wanted to send out to the reader is this: We have some wonderful guitarists /musicians right here in the United Kingdom. You may have heard them playing on your favourite albums, cd’s, films or games; but you were totally unaware of who or what they are. In short, they are non-existent. They don’t feature on your radar.  Actually, their contributions, goes beyond the shores of the UK.  They are international in stature, and of the highest calibre of working professional guitarist. I wanted the message to assist the reader in embarking on pleasant musical discoveries. To further assist the reader on having a wonderful journey we brought the music to you. Each page contains a hidden gem (QR codes) for you to unearth.  The other message I wanted to emphasise is that this is a book of celebration! The message also encompasses a celebration of the arts, culture, humanities and music from the perspective of being an African/Caribbean/Duel Heritage guitarist based in the United Kingdom.

Yes! I’m working on a new writing project even as we speak. The project is in my head (laughs). I can see, feel and taste its completion. Many roads to Rome, goes the saying, but which one to take? My inclination is to take the narrow pathway to success. This work or concept is something I’d like to develop.  I believe it’s important to write about subjects which you are passionate about. Obviously, we live in a world of business.  It would be foolhardy or otherwise to put out subject matter which has little relevance. Still. There are other musicians who need their stories to be told. Their voices to be heard. Here is one instance.  One of the greatest successes I have witnessed is a musician from the UK African/Caribbean/Duel Heritage community who took it upon himself to leave Great Britain for The United States of America. Many told this gentleman he was crazy; why give up a promising career here in the UK to chase a pipe dream?  He left regardless! Soon word spread abroad, that this crazy young man was on a world tour performing with….. Madonna! I look forward to the next instalments.

Europe Books thanks the author Derrick Wallace once again for taking the time and answering our questions. We are really pleased to have walked alongside him on the editorial path that led to the publication of his book Manz Dem. We wish him the best of luck for his book and for his future works.

To you, my dear reader, I wish that this book allows you to explore and enjoy a journey to discover a pleasant and energetic musical project that involves many professional guitarists who, from the United Kingdom, have crossed the borders to lean towards an international musical context. Long live the art, long live the culture, long live the music! They make our life full of colour, harmonious and full of beautiful emotions!

So, my dear reader, all I have to say is to enjoy this energetic reading!