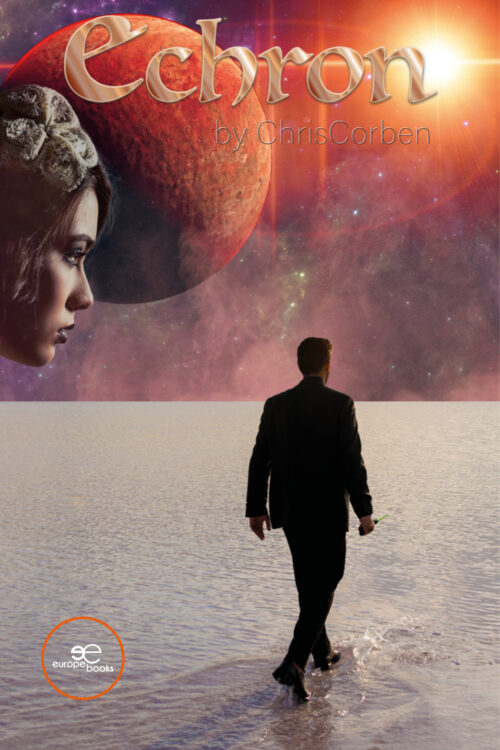 Today we talk about Echron, a book by Chris Corben, published with our publishing house Europe Books.

Europe Books had the pleasure of interviewing the author Chris Corben, to get to know him better, what was the moment that led him to the writing of his book Echron, as well as if he sees himself in the 3 protagonists of his story.

I guess I always have had a «storyteller» within. Lots of creativity and fantasy, which needed to come out. So, at one point in my life when I was short in cash or rather broke. Having borrow off lots of money, I felt a strong urge to make money. I attended writing courses and was hugely inspired from a dream I had. From an MTV video that I saw of a gangster. He had this huge yacht with a helicopter station on top. I was asking how he made it from thought to action, on to bringing things to life. Whereas he answered me (dream/telepathy/voice/) «Just hustling». This was answered enough, and pushed enough because I recognised it. I then felt that the solution and the story came to me, I felt that creativity was released.

Those who would appreciate my book are; likeminded people like me, spiritual people. Those who enjoy fantasy and fiction stories, and furthermore the mix used in the book are characteristics, I believe, appreciated by an audience of this book. Also, I think that there is little on the market on the point of view from the pushers of drugs. The story told here is fiction but has many related stories to the harsh drug environment of the pushers, so for those curious of that I hope they will enjoy the book. In the history of stories, I think people have failed showing their true colour, but very cool when I see they have captured it in movies and books. Cool when I see them do it in Hollywood, don’t misunderstand. This drug work is, I’m afraid, awesome cause when you meet one pusher/gangster/hustler which is one out of thousand drug addicts, he can weigh out ten good policemen. It’s like when you are in the military you get physically warned down and then built up again. In the drug environment you get knocked down ten times, and have built yourselves up. That’s the kind of the characteristics that I’m looking for in Echron books.

The 3 protagonists of the story are Kristoffer, Patrikk and Tora. I would say that there would be mostly from me in the character Kristoffer. He is very creative, but he is occasionally psychotic, and it can be described as four moods. They are: Pleasantly nice, weird and messy, sick evil, concentrated and collected. From Patrick, I can feel his anger, but not the sneakiness that he has. Tora’s character is direct and “real”, which I feel I am too. She is not fake. However, she can also be perceived as rude, which I am not. But sometimes we people get misunderstood. She doesn’t get misunderstood. She loves drugs as I do. She uses and sells them. I don’t any more.

I have received feedback from people who have read my work that it is an agile writing style.I want the text to be perceived as light in style, so that it actually reflects the content and becomes credible for the jargon of the environment. The language is direct and the vocabulary is not complicated. It is characterised by some abbreviations and slang, and often an “incorrect” mixture of both. This is because the environment itself has this form.

Yes! I’m working on a new book, the title of it is: “Angelic Power». The action takes place in Norway and is about Christian which gets used, as they abuse his powers. It gains their advantages on his behalf. An Oracle, a woman, tells him about them and tries to help him. There is a rapper who benefits from him also and all at his expense. In this story there is also another woman, a kind of an evil woman, more like a witch,  who works as a hair dresser. Two spiritual people will probably follow her company. And there is the third guy, Whic, who is a entrepreneur maybe I want him in my book. I think I will be considering the ideas of something I wanted to give away to my poor cousin. But I’m having it in my Angelic Power. I´m now working on Echron volume 3 which I see as only a student in this, books are just getting better and better. I’m also writing notes to Echron volume four, where Kristoffer finds himself in The United States of America.

Europe Books thanks the author Chris Corben once again for taking the time and answering our questions. We are really pleased to have walked alongside him on the editorial path that led to the publication of his book Echron. We wish him the best of luck for his book and for his future works.

To you, my dear reader, I wish that you will deeply appreciate this book and that it captures you in its colors, in what happens to the 3 main protagonists and that it keeps you in suspense so much so that you don’t want to close it, ever!

So, my dear reader, all I have to say is to enjoy this fictional reading!