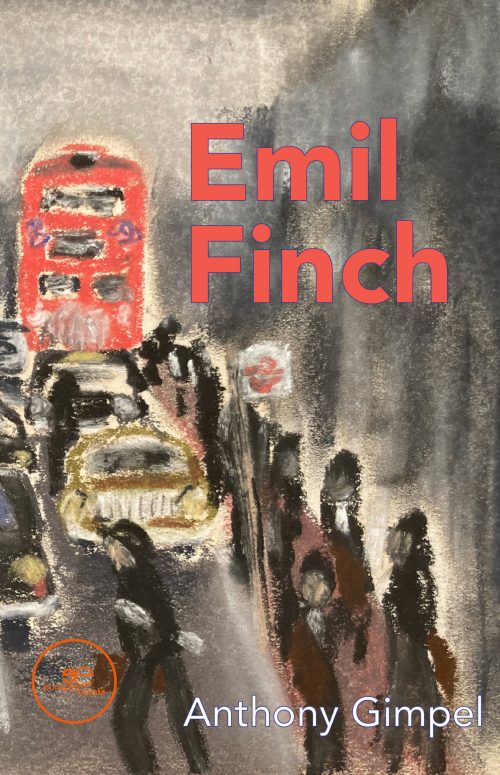 Today we talk about Emil Finch, a book by Anthony Gimpel, published with our publishing house Europe Books.

Europe Books had the pleasure of interviewing the author Anthony Gimpel to get to know him better, what was the moment that led him to the writing of his book Emil Finch, as well as what he would like to hear from his readers.

I began the writing several years ago. The original title was “D Novel”, based on the first chapter, the conversation with D. I intended to write more about D and who he was but instead I wrote the chapters about the Statue and Suitcase and the Old Lady. These chapters never seemed to fit together so I put the whole project to rest. Much later, I understood that the main character is Emil,  and the writing took off. I enjoyed it immensely. I gave the first draft to a friend to read and she suggested a number of valuable improvements. As a result I re-wrote the second conversation with D, which for me is the resolution of Emil’s anxiety. I scrapped one chapter altogether, wrote the monologue for Melinda and added to the meeting of all the characters in the Park. When I write, I don’t have a plan – I don’t know what’s going to happen. There is no plot that I can follow. I allow thoughts and ideas to develop as I write. Obviously, some of the themes are going to be pursued, such as the Inspector’s search for the source of the Chelsea bun. And it was probably predictable that Emil and Melinda would finally get together. But Emil’s invitation to James, who he’s only just met, to go home with him for a bath, came quite out of the blue. I’m not sure I’d have the courage to do that myself.

There are memories from my work as a land surveyor. When I was 5, I had an encounter with a Cockatoo in the zoo. My grandmother was indeed deported from Berlin to Riga, and I saw the cattle truck (maybe not the actual one) in the railway museum in Berlin. However, the toast to life, laChaim, at the end of the conversation with D is derived from my inner conviction that to forgive is the way to achieve peace and understanding. The setting of the novel is London and so much of what I describe comes from memories of living there when I was younger. The cover is one half of my own pastel painting which I did when I was a teenager. It is only recently that I’ve realised that Cockatoo and Nelson are tricksters. The trickster is an important element in Ulysses, the original Homeric story, and in many of the Greek myths and in myths from all around the world. I discovered the value of the trickster in my studies of drama and the theatre. These studies also provided me with examples of the archetypes. I’m not saying that Emil Finch is a myth but perhaps it does have some fairy tale qualities.

I would love to have a conversation with them about what they discovered. Ideally we would meet and sit down to tease out some of the archetypes. The conversation with D is pretty heavy even though it ends on a high. While I am the author of Emil Finch it doesn’t mean that I know everything that is going on. The characters, Emil, James, Daks, all have their own motives and impulses, to which I am only partly aware. A few hundred, or even a thousand words, do not do justice to their lives. I’m not sure, for instance how old Emil is. Apparently, he likes pizza but what else. There is so much fun we could have in a conversation to unfold more of who the different characters are. It’s like Pygmalion bringing the statue he has carved to life.

I was very pleased – and I feel very comfortable with Europe Books. Everyone I talk to is friendly and helpful. I spent a lot of time submitting my work to different publishers and to literary agents. Most of them didn’t even reply or acknowledge my submission which is very disheartening. However, one of the small publishers did respond. I asked to read what one of their reviewers had written. “If this guy really wants to break all the rules of literature …” made me laugh with delight. I am an anarchist. When I write dialogue I prefer to let the voice of the character be clear in the words they use. I don’t put “said Melinda” or “Dick said”. Which is fine except that it creates a problem with keeping up with who is speaking at any one time. Even I get lost sometimes. So the device to put the character name in the margin was a great solution. Perhaps, the other rule breaking was to write in second person singular. I find this interesting because it is often how we talk, using “you” when we mean “I”. I really like to hear how people actually speak. Bernard Shaw wrote this way, though perhaps a bit stiltedly and he notoriously added vast amounts of detail about the setting and the characters. By far the best is one of my favourite novels, “Zazie dans le Metro” in which Raymond Queneau faithfully records the Parisian speech including the frequent elision of consonants and vowels. Super fun.

Yes. Emil Finch is a spin off from an unpublished work written many years before which is also called Emil. This earlier story takes place in Vienna. One of the characters was called Gomberich, who now lives in England. The new book is about a journalist who is trying to help Gomberich find his old friend Emil. At least that’s how it starts. Who knows what will happen next – I don’t, though I do hope they will find Emil again. That could be a wonderful reunion. Once again I am experimenting with a different form of writing. In the first interview between Gomberich and the journalist you only hear Gomberich’s voice. And now I’ve given myself a major puzzle, because two of the characters have the same name, Jenny. How I’m going to tell them apart I do not know. But that’s how life is. They might well meet one day wearing the same dress! Whoops!

Europe Books thanks the author Anthony Gimpel once again for taking the time and answering our questions. We are really pleased to have walked alongside him on the editorial path that led to the publication of his book Emil Finch. We wish him the best of luck for his book and for his future works.

To you, my dear reader, I encourage you to immerse yourself and be captivated by the events involving the protagonists of this story, and to draw useful lessons to be applied in your every day life…and remember,  books are not only written to make us detach from reality, but also to teach us something useful!