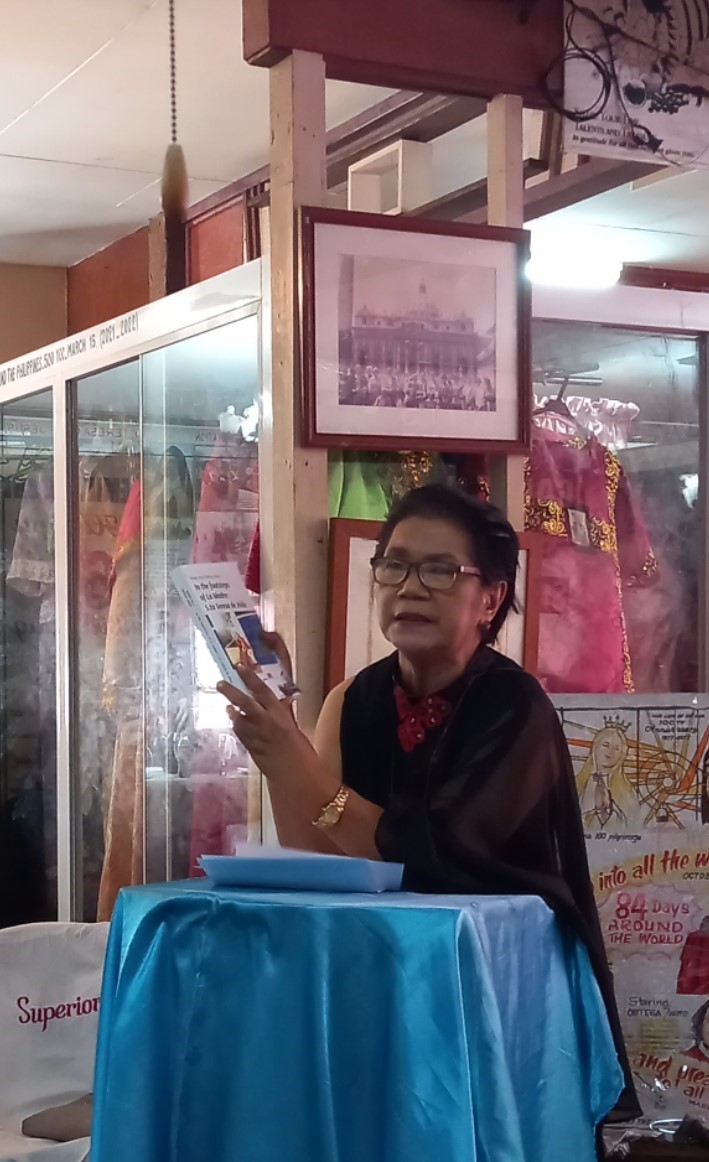 Today we talk about In the footsteps of La Madre: S.ta Teresa de Avila, a book by Maria Nila Ortega Argel published with our publishing house Europe Books.

Europe Books had the pleasure of interviewing the author, Maria Nila Ortega Argel, to get to know her better, what was the moment she decided to write her book In the footsteps of La Madre: S.ta Teresa de Avila, as well as what particularly significant life experiences find here their expression.

The idea of writing the book, our faith-lived experiences was conceived as our contribution to the 500 Years of Christianity (YOC) in the Philippines in 2021. It commemorates the introduction of Christianity in the Philippines in 1521 when Ferdinand Magellan, a Portuguese explorer discovered the Philippines and named the islands Las Felipinas after King Felipe II. Teresa de Ahumada as a child must have heard of the Philippines according to the book “The Roots of Teresa’s Nuns in the Philippines written by Mary Teresa Sideco, OCD. The theme for the 500 YOC in the Philippines is “Gifted to Give”. Our book is dedicated to Spain’s sitting King Felipe VI and Queen Letizia, who represents our victories. It was a grace that we witnessed the commemoration of the first baptism of Rajah Humabon, his wife Hara Humamay and at least 800 of their subjects, with a pontifical mass led by Apostolic Nuncio Charles Brown on April 14, 2021 at Cebu. We have accepted this gift, nurtured it and now our mission is to share our faith experiences with others.

Luz, receives an inspiration to go to Fatima so we went for a Marian Pilgrimage in 2002. In 2017, we attended the 100th year of the “Miracle of the Sun with these activities:

October 11 _ prayed at the Sanctuary of Our Lady of Ortiga. Mary appeared to a mute shepherd girl. Her father was filled with joy at seeing her daughter managed to speak and ordered her to do whatever the Lady asked.

October 12 _ encounters Spanish mystic St. Teresa of Avila whose statue was on top of the colonnade.

October 13_ attends the culmination mass. Upon setting foot at the colonnade, Luz receives a revelation from God. “People were moving towards me. Somebody pointing and with a joyous greeting said, “I knew that lady is special… I took a portrait of her.” Then there were flashes of cameras.”

Noteworthy in ‘The 13th Day’, the first major motion picture on the Miracle of Fatima is the remark of Lucia’s mother_ “what makes you so special Lucia dos Santos”? Coincidentally, at the airport in Greece, a co-passenger, Fr. Paul Fenech, a Roman Catholic Priest sketched Luz’ faceand later gave the portrait to her before embarking for Turkey.

Everyone is called to be a saint. “Saints next door,” Pope Francis calls them. All we need to do is to “live our lives in love” and “bear witness” to God in all we do. St. Teresa of Avila as a teacher, does not want us to stick to her words, nor with her experiences. She encourages us to have our own unique experience of God. Pilgrimages, making statues, producing films, writing books, look unseemly to us being married women, but we take seriously the reason why we are created, that is to know, love and serve God. Read it and you will travel around the Philippines and the world. Above all, you will journey with St. Teresa of Jesus, Doctor of Prayer. St. Teresa says, “You pay God a compliment by asking great things of Him.”. Recently, we twins were watching the old movies of Shirley Temple, the dimpled, curly-haired child star who act, sing and dance and grinned her way into the audiences’ hearts during the 1930’s in the grip of the Depression. May our book “sets hearts on fire,” to pave the way for our movie, “Footsteps (84 days around the world) to be shown worldwide.

On January 15, 2021 that Anna Cellamare of Europe Books wrote that she found my book really interesting. The contract was signed then I was working with a team of editors, graphic designers.

Elisa Giuliani – Head of the Production team chose Alessia Venditti­ as the Editor but gave an assurance she will supervise the whole process until the publication.

Alessia Venditti­_ On May 30, 2021, she sent the draft with corrections. She chose the Roman Catholic Church Hierarchy as PART I which made it easy for us to determine the other three parts.

Maria Federica Tartarelli, graphic designer _ On July 24, 2021 Mariasent the first chapter of my book which I appreciated. Then came some problems but was ironed out with the intervention of Elisa.

The book, “Interior Castle” written by St. Teresa had NihilObstat and Imprimatur printed. Msgr. Thaddeus F. Mercado (NihilObstat) and Archbishop Edmundo M. Abaya, D.D. (Imprimatur) were on our book. On October 15, 2021, Ihad abig tarpaulin posted at the wall beside our house. As a whole, I am highly satisfied with the work for on February 15, 2021, the book was a pleasant surprise, printed in full color.

First of all, I give credit to the late Abbot Santos Rabang, my professor who inspired me to write. I treasure the kind words he said of me: I was always impressed how Nila presented her synthesis, done masterfully and creatively, with accompanying photos to stress points of the faith she studied in my course. I had always encouraged Nila to write about the Catholic Faith and Tradition. Nila’s initial reaction was an adamant “No”. But once she successfully published her first short book, she wrote other books, one after the other. God the Father, Son, and Holy Spirit, Blessed Mother, St. Teresa of Avila, Avila, 2015 Avila Pilgrimage, 2017 Fatima 100 Pilgrimage and In the Footsteps of La Madre: Sta. Teresa de Avila. I don’t plan of writing more books.  We twins had gone around the world in search for God and encounter with God. It has become our evangelizing efforts in the obedience of faith to the command “Go to the whole world and proclaim the Gospel to every creature,” leaving behind the pilgrim statue of St. Teresa. As suggested by Abbot Rabang, being tertiaries of the Order of Carmelites, we come to stand still and pray.

Europe Books thanks the author Maria Nila Ortega Argel once again for taking the time and answering our questions. We are really pleased to have walked alongside her on the editorial path that led to the publication of her book In the footsteps of La Madre: S.ta Teresa de Avila. We wish her the best of luck for her future works.

To you, my dear reader, I wish that this book will be a source of inspiration and reflection for you to continue or start living your life in the name of love and to light your hearts guided by courage, love and respect.

So, my dear reader, all I have to say is to enjoy this enlightening reading!