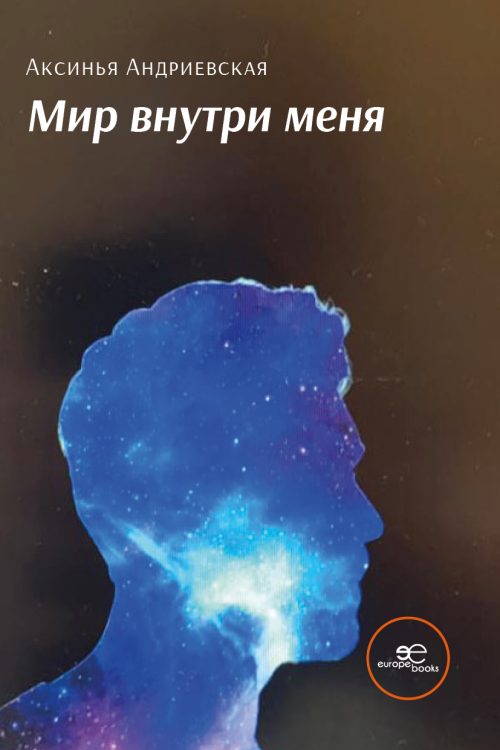 Today we talk about Мир внутри меня, a book by Аксинья Андриевская, published with our publishing house Europe Books.

Europe Books had the pleasure of interviewing the author Аксинья Андриевская to get to know him better, what are the crucial themes of his book Мир внутри меня, as well as what he would like to hear from his readers.

In the book, I hit on several themes that are relevant to our time. Phones, computers, and other devices have simplified people’s lives. Now you don’t have to go to the post office, stand in line to send a letter, and then still wait for a response. Now the phone is enough to communicate with people who are far away and not so much. Now you can make money from the comfort of your home, find a soul mate or become popular thanks to the Internet. I will not say that because of all this, people have become less communicative with each other, but it seems to me that sincerity in intentions and in words is lost. People are communicating less in person, and because of this, there is a sense of distance. In my book, the main characters try to help the residents of the town of Wickilton get their feelings or even their sense of life back. Whether or not they succeeded can only be understood by reading the book. I also brought up the topic of empathy for loved ones. In this day and age, almost every third person brings up the topic of abusiveness and tyranny on the part of men. And I gave the main character Marius the qualities opposite of abjection. With trepidation, tenderness and understanding he treats not only his family, but even his friends and ex-girlfriend. Every time he speaks to someone who is close to him, he tries to choose words so as not to hurt or offend them. He respects everyone’s feelings, and those people respect him in return. Marius teaches us how to communicate with the people we care about, because so many people argue with their family. I hope that after reading this, people will start to be friendlier to each other.

Yes, you could say that the idea for the book was born at a certain point. I wrote the first chapter in my fourth year. One day I was sitting in my dorm room listening to a song that was very popular at the time, especially after the TV series “Riverdale”, the song is called “Mad world”. I listened to this song on repeat several times, and then I just decided to look up the translation. After reading the translation, I took a notebook and wrote “Mad world around us.” And so began my book, “The World Inside Me”. And the next day, sitting in class, I continued that line. And by the end of the class, I had written a chapter. But I didn’t continue beyond that chapter. I put that notebook in a faraway drawer. I couldn’t imagine writing a whole book. A year later, I decided to move to another apartment. And as I was going through my things, I found that very notebook. And that same evening, I continued writing. At the time, I thought it was just another hobby that I would stop doing. But I really enjoyed writing the book, so I continued. Two years later I wrote my first book. As Yuri Levitansky said, “Life begins only when one allows oneself to do what one loves.” And I realized that this is indeed true. In the moment of writing a book, I feel differently. It’s moments like this that make me happy.

That’s a very good question, and one I hadn’t thought about before. It’s hard for me to say what I would like to hear from readers. But first and foremost, I would like to hear: “I loved this book! Keep up the good work!”. I think those are the most important words writer can hear from readers. And I hope there is at least one reader who will say that. I think everyone would like praise to some degree or another, even from the outside. I wrote a pretty small book. I tried to take all the “water” out of the content, and I think I succeeded. But also, there are a lot of pitfalls in this book, that are difficult to see, but possible. There are a lot of things to think about. I hope that some reader will tell me “I understood everything you wrote, even between the lines.” And also based on the first question, I would like to hear that not only did readers like the book, but that it taught them at least something. I know exactly what I don’t want to hear or learn.  Because of the translation into other languages, I worry that the main point of this book will change or lose it altogether. And I worry that many foreign readers will not be able to understand the speciality of this work.

This is my first, but not last book. I haven’t published anything before. And I don’t want to stop with just this one. When I finished my book, I gave it to some friends to read. They liked it very much, but I didn’t know what to do with it. My neighbor said she could send it to different publishers and maybe someone would respond. I was very afraid to send it anywhere. Because it seemed to me that the book wouldn’t be able to come out. Because of my inner turmoil, I put the idea on hold. But when the next person read it and said he liked it, I started to look at different publishers which I could send it to. I only told my friends who knew about the book that I had sent it to publishers. I didn’t want anyone to talk me out of it or tell me I couldn’t make it. To this day, not everyone knows that I wrote and published the book. A few months later, one of the publishers wrote back to me. It sent me a rejection. But I wasn’t discouraged. I knew right away I wasn’t going to send a book in and have it accepted right away. I was ready for rejection. And my friends encouraged me. They said everything would work out, and the main thing was not to give up, but to keep going forward. In May, I received a letter and was told that I had agreed to publish the book. And that was the most joyous and exciting moment of my life.

Yes, I’m currently writing a new book called “The Darkness Inside You”. It is a continuation of my trilogy. The third book completing the trilogy will be called “the love inside of us”. Unfortunately, I don’t have much time to write it. So, I don’t know when it will be ready. I have set a goal of writing by the end of 2022. I think I would write it faster if I saw that my book was in demand and liked by readers. Sometimes I miss the push to keep working on a book. Some days I think I got into this venture for nothing. There are days when I want to drop everything and start all over again. Maybe I would, but the experiences I’ve had throughout my life won’t let me give up. I am willing and able to be myself and write books raising important topics and sharing my thoughts with readers. Maybe my trilogy will help someone in life. And I will only be glad that it will. But I will not stop at this trilogy either. I already know what I will write next. And the fourth book will be different from my trilogy.  And I want to take this opportunity to thank my brother. He was the one who helped me take a step towards my dream. And to my readers I want to say:  Read and dream with me.

Europe Books thanks the author Аксинья Андриевская once again for taking the time and answering our questions. We are really pleased to have walked alongside him on the editorial path that led to the publication of his book Мир внутри меня. We wish him the best of luck for his book and for his future works.

To you, my dear reader, I wish that you will greatly appreciate this book both to cheer you up in your free time, and as a starting point to reflect and think. And remember every book always has something to teach us.