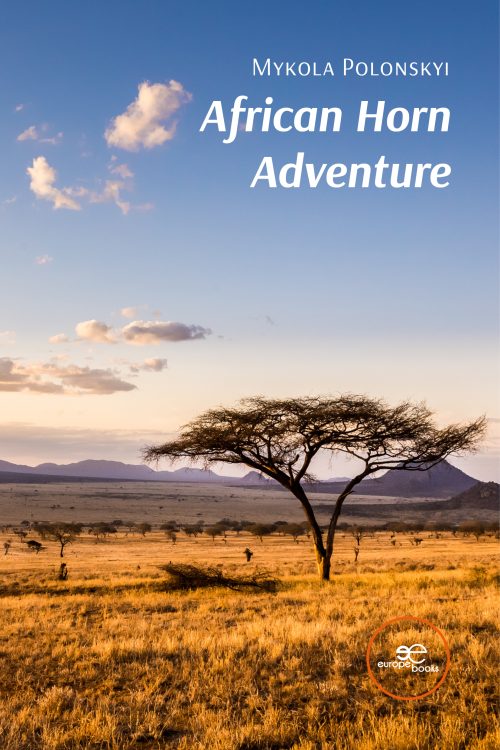 Today we talk about African Horn Adventure, a book by Mykola Polonskyi published with our publishing house Europe Books.

Europe Books had the pleasure of interviewing the author, Mykola Polonskyi, to get to know him better, what are the crucial themes of his book African Horn Adventure, as well as what particularly life experiences find expression in his story.

This novel attempts to highlight the dramatic events that took place on the African Horn in the end of XX-th century. It also explores crucial historical and cultural linkages and conflicts that happened in the lucrative game Scramble for Africa. It depicts a rich history and unique culture of ancient Abyssinia dating back to the skyscrapers of Axum Kingdom and the reign of Queen of Sheba, sheds light on the mystery of Arc of the Covenant and the discovery of source of the Nile – lake Tana, which had excited ancients and continues to attract modern travellers. You will also track the adventures of young parachutists and their advisers chasing local bandits and enemy infiltration all over the country –from impassible jungles in the south and high mountains in the north to hot semi-deserts and endless savannas of East Africa. The sensible theme of human relations between commanders and their subordinates alongside with the omnipresent conflict of cultures of people from different political systems has also found reflection in this book.

I spent nearly three years working as a translator at military mission in Ethiopia at the height of Cold War which manifested itself in a peculiar and rather strange way in East Africa. When American advisers left the country, the Soviet military arrived to train National Army. I was assigned to parachute brigade advisers and since parachutists accomplished missions in different provinces and localities, where local population did not speak English at all, I was compelled to learn local languages, at least their basics. It was a real challenge and sometimes a rewarding experience, though. The brigade advisers and their translators unexpectedly found themselves between two fires and often times had to maneuver. On one hand, top generals ordered them always to stay in the fields with parachutists, train them and give advice during combat operations. On the other hand, Ethiopian commanders responsible for our safety did not wish to stay with advisers and told them to go back to their families. They were afraid, if something happened to us, brigade commander would face a revolutionary tribunal. This often created absurd, confusing and sometimes funny situations, which I tried to present with healthy humor. Another remarkable experience reflected in my novel is referring back to rich ancient and modern history of Abyssinia,connected and influenced by Green, Italian, Portugal and British presence at different times.Visiting ancient churches and particularly observing charming Nature of this fabled land, its unique flora and exotic fauna about the mere existence of which I did not even suspect.

I had some involvement in the way the Cold War manifested itself in Africa. For the first time we see a Soviet Military Adventure inside Ethiopia and the dramatic missions of young parachute battalions. I sincerely hope that from the historical perspective of highlighted events the cognitive interest of readers will be satisfied to a certain extent. Moreover, the occurring events are described with a high degree of humour and optimism despite the evident threats and dangers hidden around us. That is why I will dare to think that the readers will receive a reasonable amount of aesthetic enjoyment and true encouragement which will, hopefully, boost their forgotten spirit of exciting adventures! I sincerely hope my readers will also find interesting to learn the fact about a French romantic poet, Arthur Rambo, an enlightened missionary who spent nearly ten years on the African Horn. He brought to Ethiopia 600 notebooks for educational purposes, met with Emperor Menelik in Ankober and asked to free his business partner who was in prison for debts. Being a Muslim he travelled to Somalia to propagate Koran. Furthermore, it was really incredible when I met General Abeba who started as a foot soldier in Korea and then fought in Vietnam with American troops. Now as a Commander of Ethiopian Army he was liberating his country from invaders and bandits together with soviet advisers, which used to be his major opponents in the past. In my view, such real life stories of reconciliation between rivals not frequently mentioned before, will raise true interest of intelligent and curious readers and will not leave them apathetic or indifferent. And these are just a few hidden mysteries of older generations and historical conundrums which a knowledgeable reader, I hope, will perceive from this novel.

Well, it was a wonderful and unforgettable feeling, the feeling that, after durable efforts,  I have achieved the desired objective. I felt happy, satisfied and overwhelming.

Yes.  There are some intentions to write a story about my experience as a translator of French. In addition, I am trying to recollect the past time events about two badly wounded WW II veterans. After the war they had to survive, suffering without adequate material support and poor medical treatment. I knew them personally, they were my countrymen.  I am also focused now on preparing the translation in English on some of my books published in Ukrainian, in particular, the novel “Eastern Express 95”. This story is about naval aviation pilots patrolling the Atlantic ocean in the late 1970s, flying old and unreliable planes and staying airborne over ocean up to 14 hours. Quite a few pilots made failed attempts to leave this regiment as they could not stand the huge overloads and continuous dangerous missions. Especially, after they learned about the outrageous secret order of MoD that, in case of military crises,  their aircraft was to play the role of kamikaze plane and attack enemy aircraft carrier. This novel was published twice, it is mostly a recollection of unknown events, describing how soviet pilots were communicating with NATO pilots which were intercepting and escorting intruders over Atlantic or near Europe. Strange as it may seem, our relations were quite friendly, there was more interest and curiosity than anger or hatred. These mostly military and not ideological games,  filled with fun, human ambitions and conflicts, are reflected in this novel. Hard work and painful reality is embroiled with courage, adventure and humour. Truth is often stranger than fiction.

Europe Books thanks the author Mykola Polonskyi once again for taking the time and answering our questions. We are really pleased to have walked alongside him on the editorial path that led to the publication of his book African Horn Adventure.  We wish him the best of luck for his future works.

To you, my dear reader, I sincerely hope that you will feel involved in the several events told and you will lose yourself in the succession of the exciting adventures described in the book, to the point that, page after page, the curiosity, to know what happens next ,will be higher and higher.

So, my dear reader, I just have to wish you to enjoy this very adventurous reading!!!