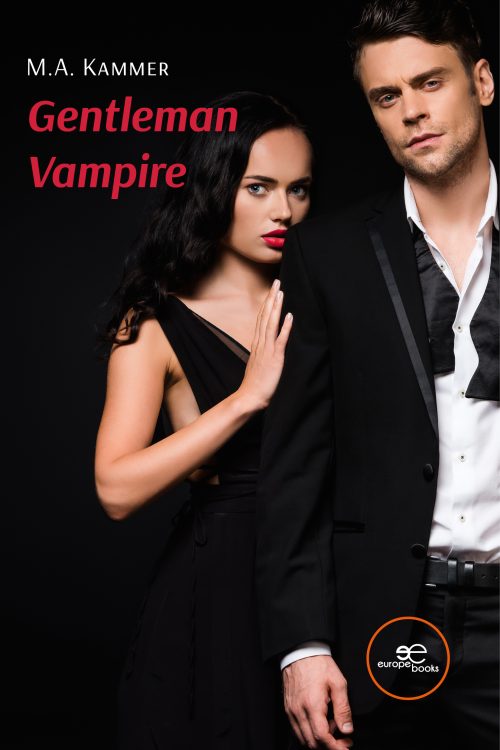 Today we talk about Gentleman Vampire, a book by M.A. Kammer published with our publishing house Europe Books.

Europe Books had the pleasure of interviewing the author M.A. Kammer, to get to know her better, where she found the inspiration to write her book Gentleman Vampire, as well as how much of herself she sees in the protagonist of her novel.

I’ve been writing for decades, scenes, characters, and excerpts for a bigger story I was working on at the time. I’ve created whole worlds with governments, monarchies and the people who live there. Invented multiple races of people with various otherworldly talents. Most of my ideas are written by hand. ‘Gentleman Vampire’ was taken from the first book I managed to make ‘work’ with the help of my critique partner. It didn’t sell, but it was suggested to me that the character Hamish Stuart, a vampire who appeared in the last half of the book would be a good character to use. I went ahead with Hamish, as I liked him, he was well mannered and well, a gentleman. I wrote and rewrote the story of Hamish Stuart and Dr Lilith Thorne, heard lots of feedback, good and challenging to hear. I put the story away for a while, then took it out and examined it in detail, took it apart, kept the basic story and characters and put it back together. That was the last version and the one I sent to the publisher.

The message I want to send is that despite all of our flaws we can succeed. It is mostly aimed at women but applies to males as well. Dr Lilith Thorne is a highly trained medical doctor and witch, skilled in fighting and weapons. She has struggled all her life with her father leaving when she was a toddler. Despite a loving mother she somehow believes it was her fault. Consequently, when she is with a male in her personal life, she became a doormat trying to please each man, so they’d stay. The last live-in lover was the worst, finally she just left him in the apartment and went to stay with her mother and grandfather. She had been avoiding therapy, didn’t want to admit to any weakness but it was long overdue, so she made appointments. Lilith also cares about her world. She worries about the abandoned street children and volunteers to go out in the evenings to check on them. This is where she meets Hamish Stuart.

I’m an educated woman who has many flaws, some I’ve battled and won, others are a work in progress. So, yes there is a part of me in Dr Lilith Thorne, how much is hard to say. I do have a background in the medical world, which is helpful when trying to make a doctor believable. I also have an interest in herbology and alternative medicine. I am aware potions are tailored according to each patient’s history in an alternative clinic. Some of our modern medicine is based on herbs, plants, seeds etc. Throughout my work life I have sometimes struggled to look for the good in many of the situations I’ve seen. I think Lilith is a bit like that, struggling sometimes, but she is optimistic, she sees light as well as darkness. Lilith has a good heart, she cares. She is often the person who fights to get a good/happy outcome even at her own expense. I think she is her own person, not so much of me.

As a first-time author I would say good. I really didn’t know what to expect. All communication was through emails. Many emails with instructions on how to proceed. I am self-taught in technology and the digital world Google has often been my teacher. I do have to use computers at work so that helps. Still, I tend to struggle. There was the odd time I didn’t get it right, but I received timely guidance. I had lots of questions and made more requests for contact then was probably necessary. The editors still responded. I found the wait between stages a challenge. My eager anticipation was tested and I’m sure the editors’ patience was as well. I really want the readers to not just like my book. It would be great if they wanted more. I suppose I shouldn’t be surprised by the constant feelings of anxiety and excitement. To the editors, please continue to be patient with me.

I would like to write more books in the world of Sentry. At the moment I’m working on a story between Theodore Templeton, he prefers to be called Templeton, a vampire character from ‘Gentleman Vampire’. Templeton and Hamish are good friends and share a house. Templeton’s beloved wife was run down and killed in the 16th century by a drunken Aristocrat who had lost control of his horses and ran down several other people on a busy London Street. Templeton no longer grieves, but hasn’t quite let her go, so he could move on. In fact, he believes he would be dishonoring her by having more than a brief affair. Templeton has been restless since Hamish and Lilith left for Edinburgh. Templeton had witnessed their love growing and made Templeton feel like he wanted more, he wanted a companion. Analouise Sutton is a black ops witch who worked with her fiancé` in the Diplomatic Corp of Sentry. On their last assignment her fiancé` was murdered in front of her, that was three years ago. She resigned from the Corp and went to work at a private investigation company, called Sage. She hunts witches and wizards who bring illegal magical goods into the country, in particular, the slave trade on small magical creatures. She is dragged into the social world of Sentry by her friend, Seer, Sara Tynan, but Analouise is not interested in any man.

Europe Books thanks the author M.A. Kammer once again for taking the time and answering our questions. We are really pleased to have walked alongside her on the editorial path that led to the publication of her book Gentleman Vampire. We wish her the best of luck for her future works.

To you, my dear reader, I hope that the message that the author wants to share, that I quote, “despite all of our flaws, we can succeed ” will reach you loud and clear, especially to the female readers who are often at the mercy of a dysfunctional male. At the same time, I hope that this story will capture you, page after page, to the point of not being able to stay away from it.