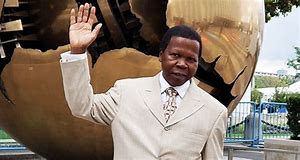 Today we talk about Obamanomics and Francisconomics, a book by Zekeh S. Gbotokuma, published with our publishing house Europe Books.

Europe Books had the pleasure of interviewing the author Zekeh S. Gbotokuma, to get to know him better, if there was a particular moment that led him to the writing of his book Obamanomics and Francisconomics, as well as  what he would tell to former President Barack Obama and Pope Francis God, if he had the chance to talk to them.

There is more than one moment that led me to writing Obamanomics and Francisconomics. The book is a continuation of my concern with and reflections on the North-South Dialogue. I discussed it in the second and unpublished part of doctoral dissertation. The dissertation title was, “Le concept heideggerien de ‘Mitsein’ et la situation internationale: Contribution a une philosophie du Dialogue Nord-Sud” – written in French (Gregorian University, 1986). As a graduate student in Rome in the 80s, I worked with Italian and European NGOs on underdevelopment issues and their complex causes. I understood that philanthropy, political will, sincere global partnerships, and moral leadership were necessary to achieve a lasting world peace through justice and human rights-based integral development. I was and I am still impressed by the particular attention that President Barack Obama and Pope Francis have relentlessly and consistently paid to the poor and vulnerable population groups. Obama’s attention to poverty alleviation is apparent, for example, in his middle-class economics, Obamacare, and ‘My Brother’s Keeper’ initiative. Pope Francis’ focus on the poor is apparent, for example, in his original encyclical Evangelii Gaudium and the institution of the World Day of the Poor. The Trump administration’s assault on Obama’s legacy and Catholic conservative leaders’ resistance to Pope Francis’ reform played a crucial role in writing a book that will hopefully contribute to keeping two amazing legacies alive. This is particularly important and timely as Pope Francis’ physical health conditions have led to rumors about his potential resignation.

I hope my readers will find in Obamanomics and Francisconomics a fresh, thought-provoking, and timely food for thought about current burning issues, from the anthropogenic climate emergency that has become a “Code Red for humanity” (UN Secretary General Antonio Guterres), to greed-related scandalous inequalities, and the global pandemic known as COVID-19, whose hyper contagious Omicron variants (BA.4 and BA.5) are gaining ground and causing growing public health concerns, according to the U.S. Centers for Disease Control and Prevention and WHO. I would want my readers to hopefully understand and share my belief that these critical times are and should be a teaching and learning moment regarding the urgency of international solidarity and subsidiarity in our spider’s web-like, warming, unequal, complex, and competitive world. This is “the World 4.0” that is characterized by the Fourth Industrial Revolution (“Industry 4.0”) and Artificial Intelligence.

Let everyone be subject to the governing authorities, for there is no authority except that which God has established. The authorities that exist have been established by God” (Romans 13:1 New International version). Many believers take this biblical word very seriously. However, whenever one witnesses tragic things perpetrated by authorities like the Roman Emperor Caligula, the German Führer Adolf Hitler and some of the contemporary leaders, one wonders whether these authorities were (are) really established by God. Fortunately, some authorities have been wonderful gifts from God. I think Obama and Francis are good examples. Here are three most important things I would tell them.

To President Obama: Thank you for using your authority as public service to the American people and to humanity by 1) making the Affordable Care Act the law of the land; 2) rescuing the U.S. and the world from “the worst financial crisis since the Great Depression;” 3) governing as “My Brother’s Keeper.” No wonder you have been named “The Most Admired Man” so many times and won the 2009 Nobel Peace Prize during your first year in office. Yes, We Can. Yes, you did a good job. May there be one million more Obamas.

To Pope Francis: Thank you for your contribution to international community’s concerted effort to resolve some of the existential threats to humanity through three encyclicals, namely 1) Evangelii Gaudium; 2) Laudato Si’ and Fratelli Tutti. You deserve the title, “The People’s Pope.” Despite some physical challenge, I hope you will stay healthy enough to continue your reform agenda and advocacy for the poor.

I think my readers are better positioned to describe my writing style. I hope some of them, including book reviewers, will consider doing it. I think that my style is influenced by my diverse linguistic/cultural and academic background. This influence is apparent in the use of words, phrases, and sentences in languages other than English, which is technically my third academic language. Lingala, French, and Italian were my main/official languages of instruction from the elementary, middle, and high schools in my native land of Congo/Zaire (DRC) to the university years in Italy. To complicate this situation, German was added to my Babel Tower experience. However, I haven’t published anything in Goethe’s language. For many years, despite many years in the United States, speaking and writing have been a series of exercises in translation, so to speak.

Yes. I am working on a special dictionary based on new words and phrases resulting from the 44th POTUS first and last name, that is, Barack Obama.

Europe Books thanks the author Zekeh S. Gbotokuma once again for taking the time and answering our questions. We are really pleased to have walked alongside him on the editorial path that led to the publication of his book Obamanomics and Francisconomics. We wish him the best of luck for his book and for his future works.

To you, my dear reader, I wish that you find interesting the way the author describes the climate emergency, the global pandemic, the Fourth Industrial Revolution and Artificial Intelligence. His description and points of reflections, in addition of being food for your thoughts, can be a moment of teaching and learning about hot topics that you were not really aware of.