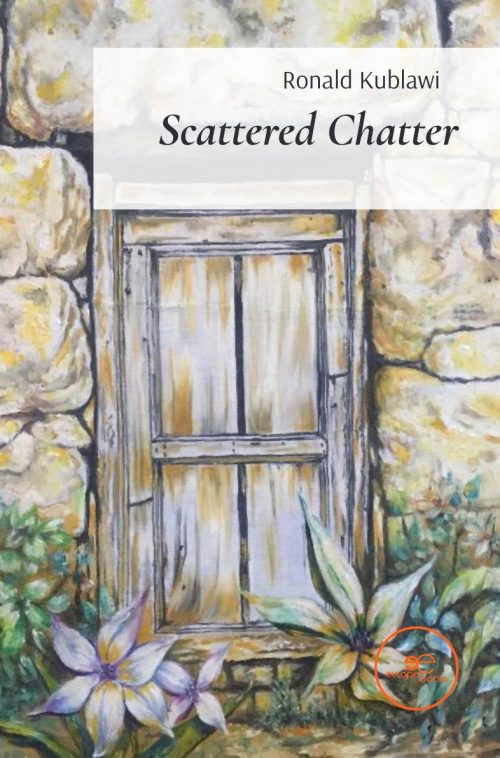 Today we talk about Scattered Chatter, a book by Ronald Kublawi, published with our publishing house Europe Books.

Europe Books had the pleasure of interviewing the author Ronald Kublawi to get to know him better, where he found the inspiration to write his book Scattered Chatternch, as well as what is the message he wants to send out to his readers.

Throughout life I was never able to understand or conceive of conflict whether between couples, people, societies or nations. Perhaps this is because, as an innocent child at the age of two, I was a product of divorced parents but nevertheless was raised by my grandparents and six maternal uncles who in the absence of my father were like individual fathers to me and later on in life proved to be my soul-mates. These six uncles were true angels with so much care for one another and so much love for me as child and a teenager. They had influenced my life with so many positive ways in music, religion, humor, philosophy, metaphysics and unconditional love. Typically, a child from divorced parents carries an internal guilt as if he is the cause of his parents’ separation but my uncles filled this void. Being the first grandchild  between the two fraternal and maternal members of my family. there was almost a war fighting over who was going to raise me until my father came to his senses and allowed me to grow up with my mother and maternal uncles.

The core message is that of oneness. Life has taught me that we are all interconnected in so many ways but unfortunately because of our negative egos and its arrogance most of us choose to be separate and remain in conflict. Very few understand the miraculous makeup of their being. Very few understand how the brain works between its left and right hemispheres, wherein the left brain was designed to be logical and the right brain was designed to be magical. Very few are aware that the left and right brains are separate, do not communicate but pass on their messages to the Frontal Lobe which has developed to be the center for decision making, emotional control and consciousness. Once the left brain becomes illogically arrogant, instead of logically sane,  then conflicting messages are received to the Frontal Lobe causing confusion in people’s lives to think and feel properly. It is unfortunate that you have to become a metaphysician to understand the brain, the mind and the heart, something that the general educational systems never teach.

I don’t even know if I have a particular style or not. All I know is that my mind does not cease and is constantly wondering, questioning and challenging what is perceived in the physical world. In fact, my brain wakes me up constantly in the middle of the night with thoughts disrupting my sleep, causing me to get up and dictate what I am receiving before it’s forgotten in the morning. It is as if someone else is thinking on my behalf and I am just a vehicle of expression with my brain’s antenna ready to receive and dictate whatever information is being passed down. I cannot deny that I am highly influenced by the writings of Gibran Khalil Gibran. Being of a Lebanese heritage I can recall my very early childhood where my family would spend all summers in Northern Mount Lebanon in Bshari where Gibran was buried and I do further recall being magnetized and obscurely drawn to his Altar.

Europe books have a great team. Florence Rosati was extremely informative and professional in her approach and never exerted any pressure on me to sign the publishing contract. Elisa Giuliani and Alicia followed through the production process to avoid any delays caused by receipt of payment and kept me informed at all times. Simone Pifferi followed through the design process in a very timely manner. Ginevra Grasso remains in touch with me till this very day and highly informative and supportive concerning promotions and/or participating in contest awards. It has been a great experience with your professional staff.

This is a very funny question because I am about to finish a second book titled “How It All Started” and was just getting ready to contact Florence and get her opinion. In “Scattered Chatter” I felt there was no focus since as the title indicates it was random thoughts scattered all over the place without a clear defined common ground. So I felt the need to write “How It All Started” wherein I write about several key true-life experiences that were influential milestones in my life.  Below is a draft of its table of contents:

Europe Books thanks the author Ronald Kublawi once again for taking the time and answering our questions. We are really pleased to have walked alongside him on the editorial path that led to the publication of his book Scattered Chatter. We wish him the best of luck for his book and for his future works.

To you, my dear reader, I encourage you to find food for thought to avoid conflict and understand if it is really worth staying separate rather than interconnected. Let’s learn and understand how to make the brain, mind and heart properly dialogue among them; all of the 3 intelligence are important, it’s up to you to align them and let them work smoothly together.