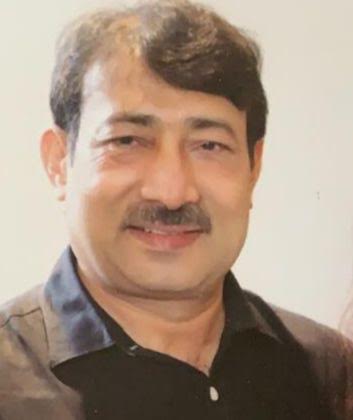 The train rumbled on the rails over the dead dark rocks of Madhya Pradesh. The impoverished terrain around, could hardly shelter some too sparse mini hamlets housing not more than twenty odd families each. Houses looked heaps of hay amidst greenish-grey cover smearing up on the remnants of rocky hills that skirmished with the last droplets of water. No electric power, no roads, or no signs of any other amenities that echo human supremacy over nature could be traced. It looked like both were struggling hard for their existence. Those hamlets perhaps had been existing for years, over generations or centuries with little change. The quantum of fierce natural forces had been heavy enough to curb the residents down, to keep their number swinging around to almost a constant mean. Narayan was looking out on the vast blank terrains. Just then, the train whistled, slowed down, and stopped for some reason unknown to the passengers. No railway station seemed in proximity. Ann looked around with pensive intents and effused, “The attraction of this place is authoritarian. Would you like to get down and go to that village that flew back a few moments ago?”

Today we talk about Swami – The God Man, a book by Ravinder Singh, published with our publishing house Europe Books.

Europe Books had the pleasure of interviewing the author Ravinder Singh to get to know him better, what was the moment that led him to the writing of his book Swami – The God Man, as well as what he wants to communicate to his readers.

I would occasionally write poems in my school and college days, which were depictions of my spontaneous emotional effusions. A poem included in ‘Swami: The God man’ is the one that I wrote way back just after I graduated. Later in my life I would wish to present my view point to the audience that could become a substance for their thoughts to find ways to better understand social and political happenings. This makes me feel contended that I have not nullified my presence in the system I live in. The sense ‘I must contribute as I owe to the society’ forced me to write. I wrote my first novel way back which is yet to be published. ‘Swami: The God man’ is the second one. Therefore, it is the inherent sense in me ‘I owe to the society to contribute’’ and not any particular moment, that has fuelled me to write.

I believe liberation from ‘the emotional and intellectual slavery’ is important for a better society. That is why I have kept ‘low tone’ expressions of emotions in this write-up. Majority is being blinded, even at present times, by arousing emotions in them. It impedes the capability of the people to discern long term harms of their emotion driven decisions. ‘Emotional blinding’ is the standard practice exercised by a select few to become political, religious or other heads to rule the society. This breeds exploitation, injustice and many more evils. Some day this can lead to extirpation of life from the earth, if continues. Religion is invariably used as the most potent tool to take you to ‘blind faith’. It should be nice to the humans if they learn to balance their hearts with the heads.

He is a highly educated and talented technocrat who feels that social and economic justice must be beyond country borders. All humans worldwide must have equal opportunities to enjoy their lives throughout the globe. Country-boundaries must vanish and the whole earth must be regulated (not ruled) by a single government to make it possible. This can be done only by the one in political power. He finds ways to come to power through scientific solutions of the mass mentality. ‘Fool and rule’ policy, being used presently by the politicians, only works to grab power and no scientific thought. People are influenced by the words of little value for better life. The best one is religious fooling. He is forced to adopt ‘religious fooling’ to come to power despite that he hates it. He represents the people those want to bring about reforms bur are forced by the system to adopt unethical ways to come to power. And these unethical ways always carry dregs and scum.

I think it is a great feeling to get one’s work published and the greatest if it is the first one. It was the same for me. I hope readers would love my work.

As I have said above, I wrote my first novel about 30 years ago. About three years back I updated it a little bit and sent first time to a few publishers. I am still waiting for its publication. Once this work is published, I shall start writing another novel. Presently, I am writing three books: each one on parenting, science basics and tennis learning. These are, obviously, related to entirely different fields.

Europe Books thanks the author Ravinder Singh once again for taking the time and answering our questions. We are really pleased to have walked alongside him on the editorial path that led to the publication of his book Swami – The God Man. We wish him the best of luck for his book and for his future works.

To you, my dear reader, I hope this reading will allow you to have food for thought to better understand the social and political events happening in the world. As the author says, “all human beings around the world must be able to have equal opportunities and enjoy life”. I hope that people learn to balance their heads with their hearts and unleash an intense and constructive dialogue between these two “brains”.