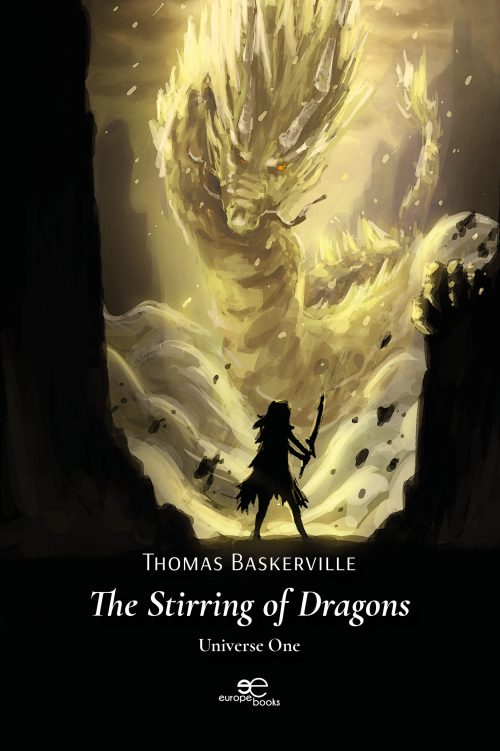 Today we talk about The Stirring of Dragons, a book by Thomas Baskerville, published with our publishing house Europe Books.

Europe Books had the pleasure of interviewing the author Thomas Baskerville, to get to know him better, where he found the inspiration to write his book The Stirring of Dragons, as well as how he chose the title of his book.

The world itself is based around a world in my head I would daydream to escape reality as a kid. A world filled with dragons, a creature I was obsessed with for a lot of my childhood. When I realised my passion for writing stories, the first one I ever drafted up was of this world and four young children exploring such a place. As I grew older, the characters grew with age in my mind as well and it became less of a story of a magical land of dragons and more of four humans trying to survive a harsh prehistoric world filled with dragons, intent on eating them. The older I got, the darker the story became until I settled on a plot that began to encompass other story lines I was beginning to work on.

Tom begins the story motivated only by his mother’s dying wish. He rarely shows motivation for anything more than to satisfy his own curiosity and prolong his own survival, in other words, a selfish coward who likes to keep secrets and is widely seen as an outsider compared to the rest of the group. Although by the end he does eventually find a new motivation, it is one of revenge for the death of his parents. Unfortunately, not everything that goes through Tom’s head is revealed to the reader for now, leading to questions about his family and true feelings up in the air, with only his actions to take from in some cases. Cathie starts out as Tom finishes, fuelled by revenge. She is also motivated by her borderline obsession for Tom. As the two characters draw closer together throughout the story, Cathie slowly learns that her feelings of hate and anger do nothing but fuel an ever-burning fire present within the chaotic world. When she eventually confronts the dragon responsible for her parents’ deaths, instead of feeling angry she is instead left rather empty and lost. Cathie eventually fills this void with her relationship with her daughter and turns her internal anger into a strength wielded to protect those she cares for instead of setting the world around her ablaze. Patrick is a character with one main goal throughout the story, to make sure humanity doesn’t go extinct. This often leads him into conflict with Tom and develop a complex overprotective relationship with Cathie. Of the four humans, Patrick is perhaps the least mentally scared of them all despite losing more than the rest of the humans combined, with a sharp focus and a firm grasp on what he believes to be right and wrong, Patrick’s will and strength of character often places him in the unofficial role of the group’s leader.

Did you enjoy the read? Did you like or dislike the characters and themes presented? Any suggestions for improvement in future works?

The book has gone through many changes over the years of writing. Its first form was planned to be multiple books, although I was very young at this stage and soon realised such plans weren’t very realistic. The collection of their parts formed the first proper draft for this book. Each of those individual books had placeholder names that directly correlated to what occurred within each story, when I combined them together, the new title became an issue for a while until I eventually settled on ‘The Stirring of Dragons’ as the plot revolving around the dragons themselves and their politics are unique to this book compared to some of the other explored concepts that I ended up deciding to extend into other stories.

This book might introduce Universe One and to a degree Universe Two as well, but both have yet to be fully explored. Universe One has an entire human history to explore after the events of this book, plus perhaps a small bit before this books events as well, and Universe Two is a vastly different world with its own problems to solve, some directly correlating to the events of this book and the consequences of actions taken. Although we get some vague answers about both Will, the Divine and the Neutral, these beings go far beyond this little prehistoric fantasy world and perhaps even beyond a single universe as well.

Europe Books thanks the author Thomas Baskerville once again for taking the time and answering our questions. We are really pleased to have walked alongside him on the editorial path that led to the publication of his book The Stirring of Dragons. We wish him the best of luck for his book and for his future works.

To you, my dear reader, I hope that this book intrigues you and captures your curiosity in order to continue to know, with strong enthusiasm,  what awaits the protagonists of the story.

So, my dear reader, all I have to say is to enjoy this exciting reading!