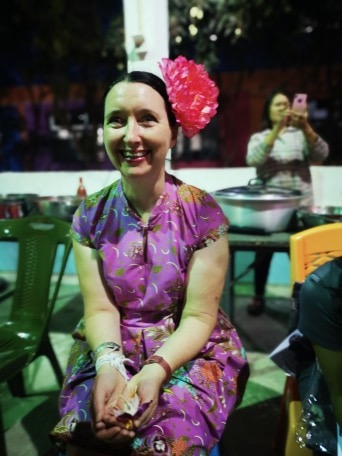 Today we talk about Three Eleven, a book by Margaret Grant published with our publishing house Europe Books.

Europe Books had the pleasure of interviewing the author Margaret Grant to get to know her better and what she wants to communicate with her book Three Eleven.

The characters are all quite open-minded, curious people, with plenty of normal human doubts and insecurities.  A crisis in the form of an earthquake, tsunami and nuclear disaster, forces them to examine at their lives.  But they do so from a state of fear and panic, and they make decisions in that state, which for some is a recipe for disaster.  The crisis unbalances them.  By the end of the novel, they come back to a state of balance, but it is a different balance.  I think that they grow up during the events, that they come to an acceptance of their lives and of their lot and an appreciation for what they have.  Perhaps they come to a more realistic expectation of what life has to offer, or of what they can expect to get in life.

Toni Morrison said: ‘If there’s a book that you want to read, but it hasn’t been written yet, then you must write it.’ I wanted to read ‘Three Eleven.’ It hadn’t been written, so I wrote it.  I think it conveys something that isn’t conveyed isn’t conveyed in any other book.  I wanted to portray these slices of life and to convey perspectives that I hadn’t seen in fiction. I believe I created something quite original and unique. Mostly, I would like readers to enjoy the book, to let the novel take them to its various locations and situations, to enter into the lives of the characters and to leave their own lives behind for a while.  That’s what I like to get from a book myself.

That’s an interesting question.  I based Charlotte on a friend of mine, a friend I hadn’t seen in a couple of years.  Let’s call her Rachel.  Rachel came to visit me while I was writing the first section of the novel and I realised she was nothing like Charlotte.  There were a couple of superficial similarities, but that was all. It slowly dawned on me that there was more of me than Rachel in Charlotte.  It shouldn’t have been such a surprise since I had created the character, but I was new to novel writing at the time and didn’t fully understand how the process worked.   As I was writing each of the main characters, I had someone in mind who I pinned them on.  Sinéad, the Irish character, I pinned on myself.  When I workshopped Sinéad’s section of the novel, nobody liked Sinéad.  I remember feeling quite offended, as if it was me that they were talking about.  But just as Charlotte wasn’t Rachel, Sinéad isn’t really me.  I wouldn’t have acted as she did.  I have never managed to be quite so pragmatic about affairs of the heart.  There is some of me in all of the characters, and not just the five main characters, but the minor characters too, and not just the female characters, the male characters too, even the bad guys.

Having my novel published was a dream realised.  It was something I had strived towards for a long time, so it was gratifying to see it in print.  And I really liked the cover.  I thought it captured the essence of the novel.  Having my novel published has also been fraught and stressful. I worry it will get lost, that it won’t find readers or get the attention it deserves. Mistakes and errors noticed in the first edition make me cringe, but these things happen and these flaws are too minor to spoil readers’ enjoyment. Sometimes I worry that people will confuse me with my novel.  And if they don’t like the novel – it won’t be everybody’s cup of tea – they might decide they don’t like me.  So far, reviews have been good.  And none of my friends or family have turned away from me since reading Three Eleven.

I have written almost fifty thousand words of a new novel.  The working title is The Dawn Centre of Awakening.  It is set in Ireland, but in an alternate present, just slightly different to the world we find ourselves in today.  I believe that this novel will be the first in a trilogy.  As yet I have only very vague ideas about the plot and characters in the second and third parts of the trilogy.  I have some ideas for short stories swimming around in my head too.  A little thing I wrote called Knickers will be published in Issue two of Skirting Around. A Scottish based literary magazine. I am excited about that.  I also write short essays for my newsletter which readers can sign up for on my website:  margaretgrantnovelist.com .  I have had a couple of months off recently, so I have a time to write and generate ideas, but I will be back to work in December, so I will become a weekend writer again.

Europe Books thanks the author Margaret Grant once again for taking the time and answering our questions. We are really pleased to have walked alongside her on the editorial path that led to the publication of her book Three Eleven. We wish her the best of luck for this novel and for her future works.

To you, my dear reader, I wish you to enjoy the novel and to enter the lives of the main characters, just like the author wishes too!.. Somehow, some of their lives could resonate with yours and could let you see things from new perspectives to put into practice in your everyday life.

So, my dear reader, I just have to wish you to enjoy this very interesting and unique reading!!!