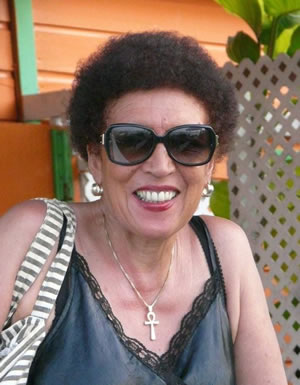 Today we talk about Six Steps. An African-Barbudan-Caribbean story, a book by Claudia Ruth Francis published with our publishing house Europe Books.

Europe Books had the pleasure of interviewing the author Claudia Ruth Francis, to get to know her better, what was the moment that led her to the writing of her book Six Steps. An African-Barbudan-Caribbean story, as well as what added value travelling in different countries has brought to her writing style.

If I had to single out a moment it would be on a visit to Elmina Castle in Ghana in 2019.

There was never one moment. I have lived with my African history all my life. If there were a defining moment when I knew I had to write some of our Antiguan and Barbudan History in a format that could be read by young people and the wider public it would be many years ago. I had been asked to conduct a session at a school in Antigua. The students were up to twelve years of age and the setting was under a tent in the grounds under the hot sun. The children were interested and expectant. The teachers too. I asked anyone to name a famous person from Antigua and Barbuda. After a long silence and some encouragement from me, a little girl raised her hand and said, “Queen Elizabeth” I was shocked and looked to the teachers for assistance. They too remained immobile and those present only started to respond when I mentioned the word athlete (Antigua & Barbuda has produced an astonishing number of international competitors per head of population) and I went on to name our post-colonial political heroes. There are of course many writers, artists, musicians. The students and teachers knew these names but, in the Caribbean, we are still of the mentality where we think of Europeans first.

We should learn our history in the Caribbean and from where our forebears came which (in Antigua and Barbuda) is Africa. A recent census named 95% of the people as being of African descent. In addition to their African blood some people are the descendants of English, Scottish, Irish and Portuguese colonisers and settlers. And an unknown number of people carry the blood of the original light skinned Caribs who lived in Antigua and Barbuda before the Europeans and subsequently the Africans arrived. The fate of the original occupants of these islands is referred to in SIX STEPS. This is not the first book that I have written where I attempted to communicate our island history in a fact fiction story. Island Issues (circa 2003) became the first book in Tides That Bind (2007).

Most writers of fact fiction are influenced by their own experiences. Therefore, in the early stages of the book Charity’s schooling is written from my own life. Also, to maintain accuracy I wrote very much from my time line. I did first visit the land of my father’s family, Barbuda, in the early 1970s; I did go to the Sotheby’s auction of The Codrington papers in London in 1980. I did visit Dodington Hall in England, a fabulous estate built on the backs of mostly Barbudan toil. I did experience the appalling segregation in England backed up with bill boards denying residency to Colourds (as Black people were named) in the 1960s 1970s and 1980s. I was denied an apartment in Cardiff where I was to spend several years at college. I was the first coloured student on my course. I remember the Principal who interviewed me being taken aback as I walked into his room. ”Well, there was no question on the application form!” I said brazenly. I think that line secured me my place. I did travel to Barbuda after Hurricane Irma in 2017 and witness the aftermath as lived by Charity and her ancestors. We are all shaped by our time on earth and some of us are influenced by those who were here before us. But I am not any one of my characters. However, Charity was stopped and questioned by the police in my car (in London) For Charity it happened in 1980. For me it happened in 1995.

Experience and knowledge make you grow. I would like to believe that talk and travel, listening and learning, meeting and mixing with persons of different origins, culture and religious persuasions have improved and matured my writing style. I first travelled to Morocco when I was in my early twenties. I was with my husband and young son. I was blown away because we blended into the greater population. We were Christian and most of the people we came into contact with were Muslim. The North Africans were the most respectful, generous, decent people. In those days Christians, Muslims and Jews lived happily side by side in Morocco and shared certain community buildings such as museums. I love Algeria and we spent six weeks at one stage without meeting anyone who spoke the English language. Travelling in North Africa and deep down into the desert had a profound impact on my life. I have since then travelled to many countries in Africa and usually with friends who had family in those countries so we were able to live locally rather that find our way as tourists. I did however travel as a tourist to Ghana in 2019 and the trip to Elmina directly inspired the writing of SIX STEPS. Without doubt many of our Barbudan people are descendants of Ghanaians.

What I do know is that one has to have a target audience when writing fact fiction. My book, SIX STEPS is not an academic book detailing the iniquity of the Atlantic Slave Trade. There have been many books on the subject and indeed the dreadful legacy we still live today; but researched factual material is high- brow and will only reach other academic parties. I read such material and try and translate the subject into reading for the wider public. We must record our history for posterity. I have written several books. My first two books Island Issues and A Bigger Island were noticed by a publisher who unfortunately went out of business shortly before publication. I will forever be grateful to the original editor (an African American) and her husband (Black British) for giving me the chance to believe in myself as a writer. Their edited Manuscript of the two books became TIDES THAT BIND. This was followed by THE ROAD TO WADI HALFA and MISSING. These (3) comprise the Lion Series which takes a family from the West Indies (Caribbean) to London in the 1950s, grows the family in London in the 1970s,1980s, 1990s, and takes members of the family to their maternal country of origin (The Sudan) in Africa in the 2000s. Again, they are fact fiction books based on life in these three continents for a successful Black family. They are thrillers. I rarely write about losers in life. It is why Venus in Island Issues, despite her early life of poverty, succeeds. That is why Goldie in SIX STEPS (despite her loss and suffering) is so strong and survives. It is why Charity is given a shot at life on earth.

Europe Books thanks the author Claudia Ruth Francis once again for taking the time and answering our questions. We are really pleased to have walked alongside her on the editorial path that led to the publication of her book Six Steps. An African-Barbudan-Caribbean story. We wish her the best of luck for her future works.

To you, my dear reader, I hope that knowing the history in SIX STEPS of the Caribbean, of its inhabitants and ancestors will be of great interest and curiosity to you to the point of wanting to read it and learn more and more, day after day.