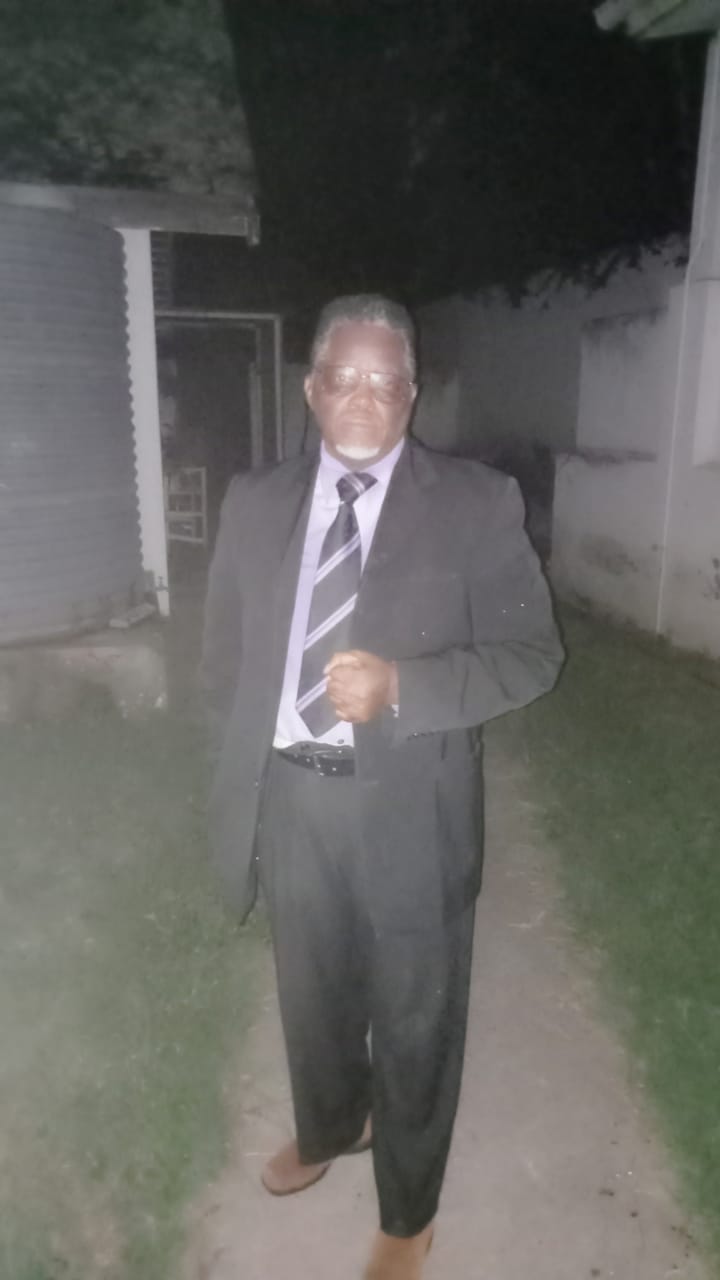 Europe Books had the pleasure of interviewing the author Oupa Joshua Gqozo, to get to know him better, when he decided to write his personal story in his book Autobiography of Oupa Joshua Gqozo, as well as what sensation he felt by reading his life on the papers of his book.

I decided to write my life story after I was kicked out of office as the current regime wanted me out the negotiating Table called Codesa. All newspapers and news media distorted all that was concerning my Ciskei Military Government involvement with the ANC. To make it worse, I was summoned to explain myself the Killing of my soldier and the 29 of violent and insulting protesters.  I said the truth about what happened and why. I had my notes as I was interviewed by my lawyers. I noticed that my lawyers modified my statements in order to fit the political and legal context of the hostile environment. Ever-since I was the military leader of Ciskei, the bought media journalists reported lies and propaganda about my name and who am.  I became tired of the ANC’s Communist Party to rewrite the History of my country while I stayed in the apartheid Government till the end, while others fled the country for actual crimes they committed, killing black people who did not agree with their ideologies. I refused to be converted and invented by the Communist regime. My children were still very young. They were bombarded by my enemies, telling them propaganda to suit their corrupt beliefs the true South Africans never heard of. Many South African citizens knows very little about what really happened to me and to all moderate leaders of this country. They must know the truth, and truth will set them free. The turning point happened when I survived the shootings at the prominent Traditional Healer’s house. Gononda died after seven days we were shot at. I survived, despite the people declared me dead. That is when I decided to set the record about the true story about my country, contrary to re-writing the History of South Africa by elite communists who are outdated by the extent of civilization since their God Mandela was sentenced for extortion and bombing innocent black people in South Africa. I had to make the record straight.

I became very glad in telling the truth about who I am rather than who I am confined by the media. Everything I wrote in the book reflects of what I am what I always was. From the time I was a small boy, I was always on my own. I always loved to take a photo of myself by photographers. I always had to write something on my Diaries. When I found employment in the houses belonging to white South Africans, I bought myself a Camera to make sure that wherever I went, I took pictures. That is why I have a lot of photo albums in my house, I took pictures of my wife, my children after they were born and until now everybody in my family has pictures. After I was shot while I was helping a friend who was in danger. The policemen knew everything about the numerous threats, but they did nothing. I was shot three times on my upper body. I stayed in Hospital for about three weeks. After getting conscience I felt that my life was in danger. I booked myself out of the Hospital and I preferred to be nursed by my wife. Things of life became very hard. They are hard when friends disappear. You value your wife and our little children when times are tough. For this I am thankful and grateful. In my trials and political tribulations, I saw nothing to live for.  It was until 1997 when my wife gave birth to a beautiful little girl we never planned for. God planned for us. She gave my life back. I said whatever it takes, I have a little girl to live for, and of course my wife and children who stood by my side every day. I then collected my all my scrap papers, my note books, my Diaries and all photo albums in my house.  I started to write sentence to sentences, chapter to chapters until now.

The message I want to tell my readers is that, never confine yourself to what the world wants you to be. Be yourself, no matter what your background or your circumstances. I know that I am unique, my fingerprints are mine alone. My Creator loves me for what purpose he has created me for. My future is in his hands, not every human being. He demonstrated to the whole world that he did not forsake me and my family. He remained faithful to me even as I lost tract of his love. He stayed the same yesterday, today and forever. If God is with me, who shall I fear. Even Satan trembles when I call his name. When the enemies certified me dead on Televisions, but for the grace of God, I am. I am alive for trampling on people of God to have hope of his promises, to lift the oppressed, to encourage those who are hated, like me, God is alive and in control. He loves us, the murderous will only kill the flesh, His spirit he breathed to us will live forever. My readers will be encouraged that if God is with who will be against us. Don’t be conformed by the corrupt world but conform the world, be the Ambassadors of the living God, walk by faith not by sight.

When I was old enough to read, my grandfather who was an Apostolic minister, and a farmer, inspired me to read the Holy Bible. When my grandfather came back from work on the farm, my grandmother gathered us (5 grandchildren), he used to read the Bible aloud so that we could hear. He taught us to obey God as our spiritual father who created heaven and earth, and everything in it. As I grew older, I read many books. When I was in standard Six, I became inspired to read fiction books, polish investigation books, comedy books, novels and later Christian books. Yes, the first book I read was the Holy Bible. From Genesis until Revelations, it taught me that God created male and females with his own hands and breathed his Holy Spirit into our nostrils. Male and female is his special creation. My grandfather’s teaching did not end there. As you asked, what did the first book teach me? It taught me that the world is very evil. I was not surprised that my life became very difficult from the day I was born. I grew up in a remote place called Witgatboom. It was in a jungle where my grandfather had to dig out big trees in order to make a field to plug. My school was far away, we walked into jungles to reach school. If I was not taught that God loved me no matter what was around me. My motto became, “Do not walk by sight, walk by faith”. Put all your woes on the Lord who sees everything that happens to us. To make the story short, I want to talk about the time I was ambushed in the house of a prominent Traditional here in July 2001. It was very difficult to be taken to Hospital for political reasons. After I was operated on, I woke up unconscious after seven days. I was then put in a whole hall of very sick people with no security. Around me I saw close to five people die overnight, screaming for help. There were no security offices seen everywhere. I was horrified when I saw strange people staring at me with hostility, talking to themselves that I was helpless. “Saying did you know that today we could do anything we wanted to you. Where are your bodyguards?” It is when I realized that my life was in extreme danger. I realized that only God will redeem me from this futile state of my helplessness. If I was dependent on God who is everywhere, seeing everything, knows everything, he is the architect of my existence and my future. The word of God says, without me you are nothing. This taught me that I am what I am by his grace so that I might write this book to set History records straight, refuting what the propaganda spin doctors spread about the highly distorted History of our country.

Yes. In fact, I have been working on a second book about the continuation of the first History in my Autobiography. After I survived in 2001, I started questioning God why he made me live and what can I do to be thankful of him making me live. I went to the Bible School to search for the face of God. I had no money but my wife encouraged me to go. We sold our old car to register at the Global School of Theology Campus of Missouri University at Rustenburg. At the school I realized that every lesson we were taught pointed everything of my transgressions (Isaiah 53:4-6.I observed that even if I thought I knew God, I knew only Worldviews, contrary to God’s views.  I violated God’s laws in the Holy Bible. Thinking that when you are born from the Christian family, I am a Christian. At the first semester, we started being tested the Old Testament.  I laughed and said to myself, I know the Old Testament, I will get 100% marks.  I said, I read it since I was a little boy. by final examination, I failed dismally.  My lecturer told me that “Do not think that if you are born from a Christian family house you automatically become a Christian.  If it was so, a man born from a “Ford” garage, he thinks he must a Ford car.  No, Oupa, to go to heaven you must earn your Christianity as a son of God.  There are no shortcuts.  Know God first and all things will follow by his grace. At this moment I have started to write my second novel entitled “South Africa Colonized Again.”  The objectives of all Chapters are outlined. I realized how futile, hopeless my life would become if I was not dependent on God who is everywhere, sees everything, he is the Architect of my existence and my future. The word of God says, without me you can do nothing.  This taught me that I am what I am by the grace of God so that I become a living testimony of how He loves us all.   I had to write this book to put the record straight, to refute the distorted History of my country, South Africa.

Europe Books thanks the author Oupa Joshua Gqozo once again for taking the time and answering our questions. We are really pleased to have walked alongside him on the editorial path that led to the publication of his book Autobiography of Oupa Joshua Gqozo. We wish him the best of luck for his book and for his future works.

To you, my dear reader, I hope that through reading this book, you understand the uniqueness of yourself to defend and praise every day of your life despite your background. Allow you to reflect on the purpose for which you were born and created, without conforming to the world around you, and walking your life in the love of God that drives away evil.

So, my dear reader, all I have to say is to enjoy this inspirational reading!